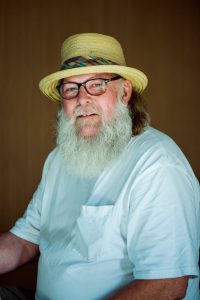 The father-son duo of Bob and Sam McCarty from Ferguson, Missouri, have provided their expert craftsmanship in window and storm window restoration to the JHN historic homes project since May 2018. Their work began in Joplin when Bob McCarty assisted Bob Yapp*, renowned preservationist and window restoration expert, with a window preservation ‘boot-camp’ in Joplin that utilized nine windows from the Schifferdecker home. McCarty regularly assists Yapp at window workshop presentations. He says they have developed a unique kinship as professional colleagues who continually collaborate and bounce ideas off each other.

Prior to window restoration, McCarty was self-employed for 34 years as a skilled decorative painter and wall paper hanger. In 2008, he changed his niche to window restoration. Interestingly enough, Bob became passionate about window restoration after he purchased an older home. His wife chided him that they really needed to address the worn windows on the house so he attended a Painting and Decorating Contractors Association (PDCA) conference. It featured a window restoration presentation by Duffy Hoffman, a prominent window and historic paint restorationist. Afterward, he called home to his wife and said, “Honey, we’re not going to buy new windows. We’re going to restore and repair the old ones.” He did, and it opened up a whole new direction for his business.

The McCartys like to refer to themselves as the “color guys.” Bob says, “Most of the trades see in black and white. We love the [colorful] detective work—the deep investigating into the woodwork and how the window fits into the structure.” Bob was introduced to the JHN project by Michael Englebert Griffin, Preservation Architect, who he’d initially met at a preservation conference and had worked together on a restoration project at Lafayette Square in St. Louis. Bob was intrigued by the historic detail and the scope of the JHN preservation project. “This is true restoration work—down and dirty,” Bob says. “We are doing our best to save every original detail. It is those original details that make these houses so unique. That is what I love about this project the most.” His son, Sam, adds, “This is a unique opportunity for us. It will be wonderful to someday see our finished work. There is nothing quite like seeing all of the details come together.”

“Many people do not see what it takes to keep [a home] original,” Bob says. “The price of restoration is far more affordable than one thinks. And there is just no comparison with keeping the original.”

* Bob Yapp is a founding member of The National Window Preservation Standards Collaborative and nationally recognized expert on window restoration. He has more than 40 years of experience promoting preservation efforts, including the rehabilitation of over 160 historic properties. He hosted “About Your House with Bob Yapp” on PBS for many years and has restored over 6,500 windows during his career. In 2015, Bob restored all of the windows in the Cupola of George Washington’s Mount Vernon Home in Virginia. Yapp hosted a “Window Restoration & Weatherization Boot Camp” utilizing nine windows from the Schifferdecker home on May 18-20, 2018 in Joplin.