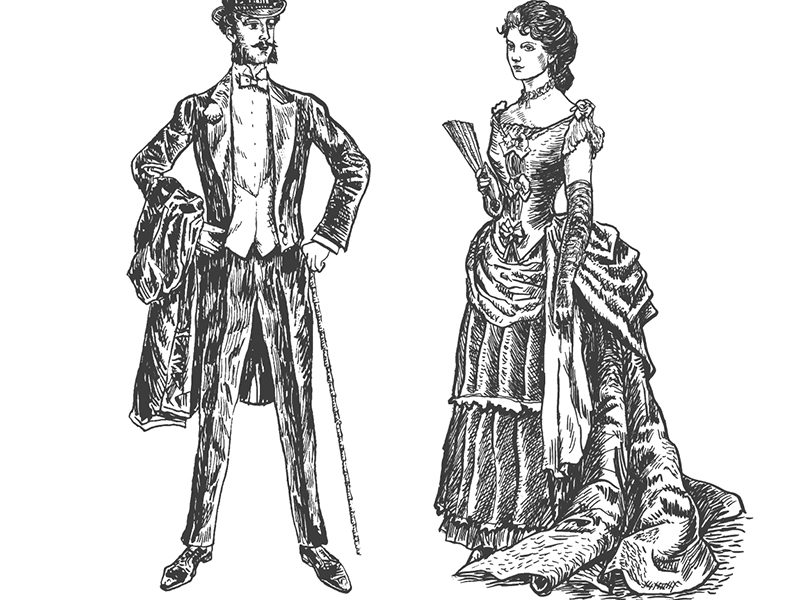 America at the turn of the century was a very formal society, where precise protocol existed. Springtime was the start of the social calling season. Mrs. Burton Kingsland composed a series of twelve articles on good manners for The Ladies’ Home Journal magazine. In her column entitled “Good Form For All Occasions” from January 1900, she explains the etiquette of calling.

Little squares of pasteboard that for centuries have been the accredited representatives of our personal identity…a lady’s visiting card is of medium size, engraved in script or Roman letters, the address in the right-hand corner, the reception day in the left. A man’s card is smaller, having the name printed in full without initials, with the prefix ‘Mr.’, and bearing the address of his home or club.

If a lady has a reception day her friends should try to call at that time. She need not receive chance callers on any other day—she could never be sure of an uninterrupted hour at home. The servant should be previously instructed to give the same message to all comers: ‘Mrs. Homer is engaged to-day, and is sorry not to be able to see any one,’ at which none could take offense.

Visits of condolence may begin a week after the event that has occasioned them. Cards are left in person, without asking to see anyone, and one may call a fortnight later. The same courtesy is observed when inquiring for friends during or after an illness, or when one wishes to congratulate those of whom some new joy has come.

A lady never calls upon a man except professionally. Husbands and wives rarely call together in America; indeed, husbands rarely call at all—they are the only ‘immunes.’

When a man gives an entertainment at his studio, on board his yacht or elsewhere, the ladies who have accepted his hospitality send their cards shortly afterward by messenger, bearing a few words of appreciative thanks.

Cards for receptions should not be sent to daughters of a family without including the parents as a courteous formality. In sending an invitation to dinner to a new acquaintance it is polite and proper to preface it by a call.

Upon returning home after a long absence a lady sends cards to her friends apprising them of her arrival and usually inviting them to a tea or to her ‘days at home.’

When inviting a man to call a lady on such and such days, and hope that I may see you. A girl seems over-eager for attention if, at their first meeting, she asks the man to call. To have him disregard the invitation would wound her pride, so she must exercise discretion and make reasonably sure his feeling on the subject.

No young lady visitor should receive calls from gentlemen without asking her hostess and her daughters to be present, leaving the option with them. Nor should she invite any person to call upon her without asking permission from her hostess.

Bachelors should leave his card for the mother when calling upon a young girl, leaving it to the discretion whether to be present during the whole or part of his call or not. He often entrusts his card to the agency of mother or sister, for society ‘winks at’ the infraction of strict etiquette where young men are concerned.

No gentlemen would call upon a lady unless at her invitation or unless he has a letter of introduction, nor would a friend accompany him without his having previously asked the lady’s permission, no matter how intimate his standing with the family. If not displeased with the new acquaintance she says, as he takes leave, that she should be pleased to see him again.

A man usually tries at the beginning of the season to call upon his intimate friends and those who have entertained him the previous year, but he is not expected to be punctilious about reception days though such thoughtfulness is much appreciated. When ladies are at home he asks the servant to announce him if he knows them well.  If not, he sends one card inquiring for all.  If they are out he leaves a card for the lady of the house, and one for the rest of the family.

First calls should be returned within a fortnight, but after having accepted an invitation or having had any hospitality shown by a stranger or new acquaintance one leaves cards immediately and calls within a week after the entertainment.

By way or general suggestion in regard to calls: Calling hours are between there and six pm. Upon reception cards the hours are usually named, from four to seven.

The length of a formal call should not exceed 15 to 20 minutes. The interval between formal calls should not be less than a month nor more than a year. (18)

One of Mrs. Kingsland’s “Tips of the Day” was the right time to exit. She says, “Rise to take leave while you are the speaker—not when the conversation has languished, lest you appear to go because you are bored.”

Brad was awarded the Missouri Governors Humanities Award in 2006.